Find out how I first caught the entrepreneurial bug that completely changed my mindset and life direction, which then later on enabled me to go down the programming path.

Many years ago I had the WORST thought come into my mind. It wasn’t that anything unusual happened. It was just this thing that was slowly building up inside of me, and that I was ignoring. Ignoring it until I couldn’t. I remember it happened several years after I had spent 4 years of my life studying to get a piece of paper (also known as a degree). I had thought to myself…

Is this it??? Is this really what I had worked sooo hard to achieve??

I had let those thoughts sink into my mind for a moment. I realised that I was finally opening myself to what I was ignoring for quite some time. I just didn’t want to work in this career anymore!

My worst fear had come true… I had picked the wrong career! It took me a while before I started accepting these thoughts. When I finally did, my mind began thinking about making a change and if there was a better way forward.

But I was too old! It was too late for me to switch careers. There was no way I could go through university again. It’s impossible!

Suddenly, with those three seemingly meaningless (but very powerful) words, I had created some doubt in my mind.

My thoughts began to entertain the idea that maybe, just maybe, it is possible! It gave me a glimmer of hope.

As I sat there thinking to myself, I had recalled a story that my Dad once told me some time ago. It was about some family friends of ours who always seemed to “get lucky”. They had repeatedly found lots of success in life. Over and over. It was like they had some kind of magic formula. One that helped them make all the right decisions. And it was as if success was somehow attracted to them.

While I was replaying the conversation in my mind, there was one piece of information that really stood out for me.

It was that they had attributed much of their success and knowledge to one thing.

In that moment, I knew deep down inside, that I needed to start reading books. Not just any kind of books… but educational books! All with the hope that I could learn and instill some powerful knowledge into my brain. Essentially figure out the “secrets” that I’ve been missing out on.

And it wasn’t long before I started searching the internet. Trying to find something, but I wasn’t really sure what I was looking for.

Annnnd finally… I found something!

In my searching… I came across an interesting article. One that would be the beginning of a massive change towards a new direction in my life. At the time, I didn’t know it just yet!

The article was of this girl who had read 22 books before she quit her job to start a business[1]. It was basically a list of her book recommendations that she had read on various life topics from personal finance, to business, to motivation, to sales.

As I went through the list of books, there were several that had caught my attention. I decided to research those ones. I checked out the authors, read reviews and there was one book in particular that really caught my eye as it just stood out and pulled me in.

It was called… The Millionare Fastlane by MJ DeMarco! 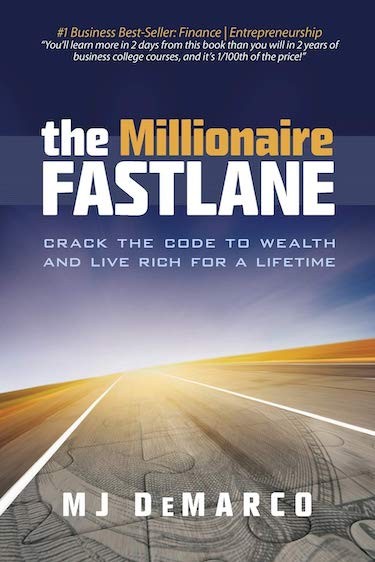 This book literally changed my mindset, and from it I began my long journey towards changing my life’s direction! There are of course several more books that I would highly recommend reading and are found in my About section on my site. They also helped me along the way, but The Millionare Fastlane was the one that started it all and was a powerful book.

It sent me on a path trying to find both a happier career and life!

When I finished the book, I started my next one and then my next. I was hooked on reading and learning, but this phase didn’t last long. I was so inspired by all the books and author’s stories, that I was just itching to take action. And I did take action. Massive action! I read something like 12-14 books before I decided to quit my job to start a business, but unfortunately it did not have a happy ending.

In hindsight… I would have done many things differently, but everything just happened that way.

I had several major setbacks on that journey, and I will not cover them! Namely because I never documented my entrepreneurial ventures along the way and they all ended up as failures! Though I did learn a lot from them, what I like / don’t like doing, and my strengths / weaknesses. I also had to pivot numerous times, change ideas, but eventually I found my success on another path, and in a different direction.

I do want to make it clear that my path was very far from a straight line, nor was it smooth. It was extremely bumpy, challenging and quite difficult at times. Again, this is a story I will only cover briefly.

The short version is when I started… I was completely full of energy, dreams, strength and motivation to start my own business and finished absolutely crushed, broken and devastated. And I just couldn’t continue anymore and knew I needed to do something else. I couldn’t think about business anymore, nor even fathom another attempt.

It was also a period where I was at a very low point in my life. I knew that I needed to go back and get a job again. And this thought had just killed me on the inside. I hated that I even had to consider this option. It was soul crushing to my dreams and goals of having my own business.

All I knew is that I REFUSED to ever go back to my previous career! At whatever cost. For me… that road was completely cut off. Since there was no going back, I had to find a different path forward.

My gut desire was that I really wanted to be in the tech industry and if I had to work somewhere, I wanted it to be in tech. This also aligned nicely with the whole startup / entrepreneurship world and could eventually lead to opportunities for me to be a founder, or co-founder, in the distant future. So I knew that I didn’t want to work in any other industry. It had to be in tech.

And along my entire business journey, I always had these thoughts in the back of my mind that I should know how to program. I felt this skill would be very complimentary to my ambitions of starting an online business. So that’s why between my business attempts, or business setbacks, I was developing my programming skills on the side. I was still very, very beginner at this point, but at least I knew that I wanted to continue down this road and become a programmer.

My new path and goal were set. I was going to get a job as a programmer!

But how? I didn’t have a degree…

So I started to search how to get a job as a programmer. And I came across an article where someone had described their entire journey of getting their first developer job as a self-taught programmer.

I was both intrigued, but also very skeptical. At first, I made all kinds of excuses.

Oh… they must have gotten lucky.

Oh… they must have had good connections.

Oh… they must have been a genius. Etc…

But little did I know that, that story had planted a tiny seed in my brain. A tiny seed of hope and possibility.

As I kept reading more and more about different career options and programming, I started stumbling across more success stories.

People who learned how to program, got developer jobs and later went on to start their own businesses.

Others were simply how they got their first developer job success stories.

Every single story I read was inspiring. All of those people… were people who had done unbelievable things! They achieved their goals and dreams.

With each success story that I read, the belief inside of me (that I can do this too) grew as well. I started to think to myself…

If they can do it, maybe I can do this too!

And I kept coming across these success stories. I would read every single one. The amount of them that I read grew to 5, then 10, 20, to 30 plus. The more of them that I read, the more my confidence and belief grew exponentially.

My thinking changed from maybe I could do this to I will do this too. It became very possible the more I read and seen so many different people achieve it.

Update from the future! Eventually I became one of those people who wrote about their success stories too. If you are interested, you can have a read of my how I got my first developer job story.

Anyways, just knowing that it was possible had made the smile on my face grow. I knew that this would be my path.

Then I had started seeking out the stories where people explained exactly the steps they took, from the resources they used to study, to how they studied and all of their tips/tricks along to way in learning how to program.

With this newfound knowledge, hope, motivation and inspiration… I had drafted up a plan to learn programming.

If you want to continuing reading about my programming journey, then you should read one of my posts I wrote a while back. It is my story of how I went from failure to success in programming and it goes even further back to cover all of my earlier programming exposures in life.

Are you a developer interested in building your own SaaS business?

Get exclusive, behind-the-scenes insights (and first access priority) on my journey and process in building a SaaS business from scratch!

Not sure if this is for you? Then check out my Entrepreneurial Dreams: Build a SaaS Business in 12 Months Challenge.

Quality content! No SPAM and we will NEVER sell your data or email... guaranteed!

Do you want to get a good understanding for the many things that you would be expected to do working as a future front end developer? I’ll…

Are you not exactly sure what a React Ref (or Forward Ref) is? Or how to use it in a project? Then this article will explain the basics to…